which resulted from the decomposition of phosphomolybdic acid (H3PMo12O40). Notably, the cage b in MOFs was constructed by MoO4

2 anions, and this cage was located outside and interconnected with independent cage a with a sodalite cage-type structure to arrange into a rare cage-within-cage structure. More interestingly, Zn/Co/Mo-MOF exhibited a remarkable CO production rate (38.41 mmol h1) with a high selectivity of 91.4% for the CO2 photoreduction, which outperforms most of the reported MOF-based photocatalysts. The result of this study demonstrates that the successful introduction of the POM's anions to construct MOFs may open up new opportunities to synthetize highly efficient MOF-based photocatalysts for the CO2 photoreduction

It is widely known that the solvothermal method has been conrmed as a classical approach to the synthesis of MOF series. Considering that the bandgap of phosphomolybdic acid (H3PMo12O40) is 2.4 eV and its visible light absorption wavelength vary from 400 to 516 nm,17 we chose H3PMo12O40 as the precursor to be combined with MOFs. In order to improve the quality of the crystal, we determined the best reaction time and temperature to synthetize Zn/Mo-MOF and Zn/Co/Mo-MOF. The crystals could not be obtained when 2-methylimidazole was not added during the preparation steps. Moreover, when DMF was replaced with methanol, we could not get the nal products. In addition, it is worth noticing that both MOFs had a good repeatability and could be clearly distinguished through different colors, as shown in Fig. S1.† Crystal structures The crystal structures of two MOFs are similar except that Co atoms existed in Zn/Co/Mo-MOF; thus, only Zn/Co/Mo-MOF was 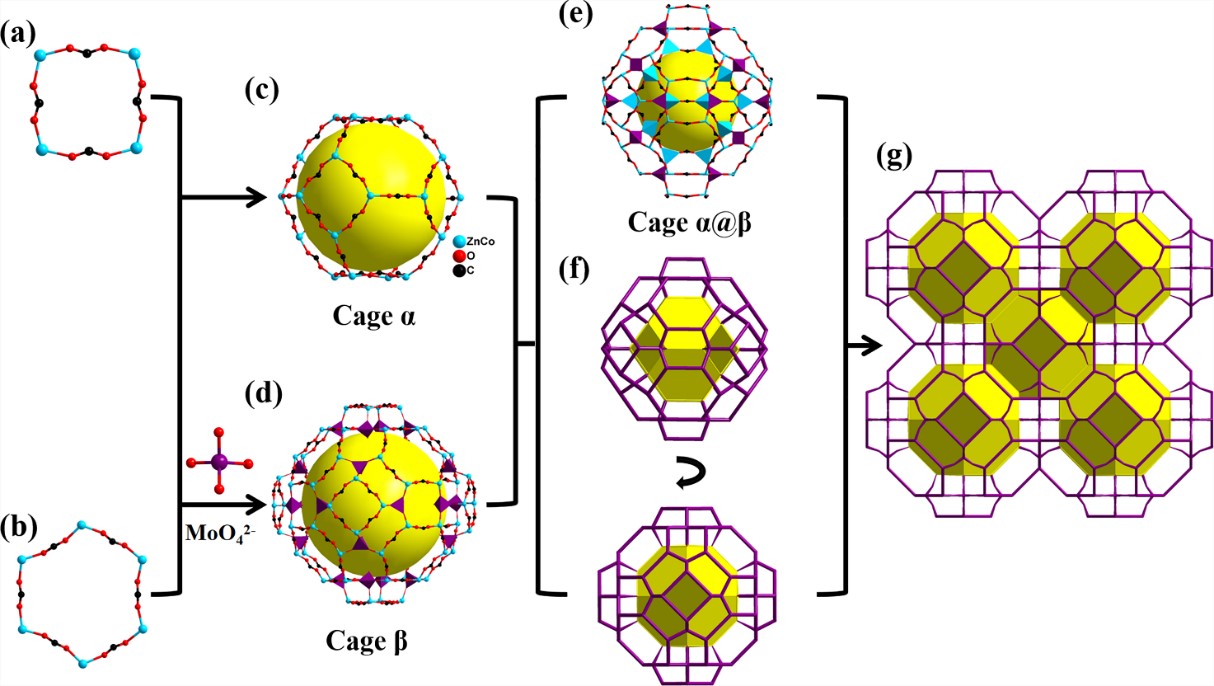 In summary, two polyoxometalate-induced MOFs were successfully synthesized via a solvothermal method. Both MOFs contained MoO4 2 anions as the structural units decomposed from H3PMo12O40. It should be noted that the cage a with a sodalite cage-type structure was encapsulated in cage b constructed by MoO4 2 anions, which featured a unique cage-incage architecture. More importantly, Zn/Co/Mo-MOF displayed an outstanding CO production rate (38.41 mmol h1 ) with a high selectivity of 91.4% due to the doping of the cobalt metal in the framework, which was superior to most of the reported MOF-based catalysts in the eld of photocatalytic CO2 reduction. This study demonstrates that it is an effective pathway to synthesize efficient MOF-based catalysts for CO2 photoreduction via introducing anions of POM to the construction of MOFs.

Photocatalytic experiment The catalytic activity of MOFs towards CO2 photoreduction was tested under visible light irradiation (CEL-PAEM-D8, AULTT, China). Before the reaction, we used [Ru(bpy)3]Cl2 as the photosensitizer, TEOA as the sacricial agent, and MeCN as the solvent, and put them into the reaction vessel together with the catalyst. Then, CO2 was used to replace the air in the reactor to ensure that the whole reaction system was carried out in CO2 environment. During the whole reaction process, the condensed water circulated outside the reactor to maintain the reaction temperature at 25 C. The amounts of CO and CH4 were detected by FID, and the amount of H2 was analyzed by TCD 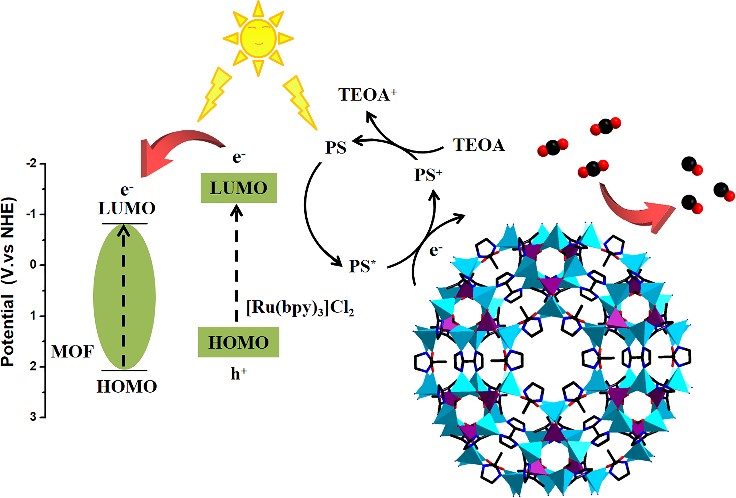 The photocatalytic performance of Zn/Mo-MOF and Zn/Co/Mo-MOF was evaluated by applying it to the photocatalytic reduction of CO2 (CEL-PAEM-D8, AULTT, China). The experiments were carried out in a 100 mL Pyrex flask. A 300 W xenon arc lamp (CEL-PF300-T8, AULTT, China) (photocurrent: 15A) was employed as a visible-light source through a UV-cutoff filter with a wavelength greater than 420 nm, which was installed 10 cm away from the reaction solution. In the system of CO2 photocatalytic reduction, we put photocatalyst into a mixed solvent of triethanolamine (TEOA, as a sacrificial base) and acetonitrile (1:4 v/v, 50 mL), and used [Ru(bpy)3]Cl2•6H2O (11.3 mg) as photosensitizer. The products were analyzed by performing gas chromatography (GC7920-TF2Z, AULTT, China). The amount of CO and CH4 was detected by FID, and the H2 was analyzed by TCD.

Highly Dispersed TiO6 Units in a Layered Double Hydroxide for ACHTUNGTRENUNGWater Splitting
Breaking the waves: A family of photocatalysts for splitting water into hydrogen was prepared by distributing TiO6 units in an MTi-layered double hydroxide matrix (M=Ni, Zn, Mg; see figure) that displays largely enhanced photocatalytic activity with an H2