ABSTRACT Ultrathin graphitic carbon nitride nanoplatelets (UGCNPs) are facilely synthesized in an efficient and eco-friendly ball milling approach. UGCNPs are of 2 to 6 nm in size and 0.35 to 0.7 nm in thickness, with an improved specific surface area over that of bulk graphitic carbon nitride. Photochemical experiments show that UGCNPs are highly active in visible-light water splitting with a hydrogen evolution rate of 1,365 μmol h-1 g-1 , standing for a 13.7 folds increase compared to that of their bulk counterparts. The notable improvement in the hydrogen evolution rate observed with UGCNPs under visible light is understood as synergistic effects from the increased specific surface area, reduced thickness and a negative shift in the conduction band concomitant with the exfoliation of bulk graphitic carbon nitride into UGCNPs. In addition to their use as metal-free visible-light-driven photocatalytic hydrogen production, the superior luminescence characteristic of UGCNPs makes them attractive for applications in biomedical imaging and optoelectronic devices.

Experimental Preparation of UGCNPs: UGCNPs were prepared by ball-milling the bulk GCN in a planetary ball-mill machine (ND8). The bulk GCN was synthesized by heating melamine at a 600 ℃ in air for 2 h with a ramp rate of 2.3 oC min-1 . Then, the bulk GCN powders (2.0 g) were placed into a stainless steel capsule containing stainless steel balls (200 g, diameter 6 mm). Thereafter, the capsule was then fixed in the planetary ball-mill machine and agitated with 500 rpm for 48 h. The resultant product was dispersed in absolute ethanol and the supernatant fraction was extracted by centrifuging at 5,000 rpm to remove larger particles, then filtering through a filter membrane with pore size of 220 nm to yield a homogeneous dispersion of UGCNPs. Finally, the suspended solution was freeze-dried at -40 oC under a reduced pressure (30 Pa) for 48 h to give 0.3 g of UGCNPs. Electrochemical measurements: The energy level of samples was evaluated by cyclic voltammetry (CV)

conducted on the CHI660D electrochemical workstation with a traditional three-electrode system, using a glassy carbon disk as the working electrode, a platinum wire as the counter electrode and the Ag/AgCl electrode as the reference, respectively. 4 μl of samples/chloroform suspensions (5 mg/ml) are spun onto the working electrode and dried naturally. A 0.1 M tetrabutylammonium hexafluorophosphate (TBAPF6, Aldrich) acetonitrile solution was used as the supporting electrolyte in CV measurements and purged with high-purity argon gas for 15 min before the measurement. The applied bias range was 0.5 V to 1.7 V vs. Ag/AgCl and the scan rate was 5 mV s-1 . Electrochemical impedance measurements were performed on a potentiostat (Autolab, Model 204) with an amplitude of 20.0 mV over the frequency range from 10 kHz to 1 Hz under applied biases of -1.5 V to -1.1 V vs. Ag/AgCl with an interval of 0.1 V. Photochemical measurements: The transient photocurrent measurements were performed on the Keithley 6300 semiconductor parameter analyzer under an applied bias of 0.1 V in a conventional three electrode cell where a sample-coated clean fluoride-tin oxide (FTO) glass, Pt wire and and a Ag/AgCl electrode were used as the working electrode, counter electrode and reference electrode, respectively. The aqueous solution of 0.2 M Na2SO4 purged with nitrogen gas was used as the electrolyte. Photocatalytic water splitting was carried out in a top-irradiation vessel connected to a gas-closed glass system. 50 mg of photocatalyst powder was dispersed in 100 mL aqueous solution containing 10 vol.% triethanolamine scavenger and 3 wt.% (respect to Pt, acting as co-catalysts ) H2PtCl6 · 6H2O. The temperature of the reaction solution was carefully maintained below 6 oC during the whole experiment. The reactor was then sealed and evacuated several times to remove air before irradiated under a 300 W Xe lamp equipped with a 420 nm cutoff filter. The amount of evolved H2 was analyzed by gas chromatography (GC-7920) with high-purity nitrogen carrier gas. A 350 nm cutoff filter was also used in one experiment to better match the absorption spectrum of UGCNPs. The external quantum yield (Φ) was measured by using an appropriate band pass filter (365, 420, 475, 500 and 550 nm, respectively) to perform the water splitting experiment under the designated monochromic light. The intensity of the monochromic light was averaged at 5 representative points (CEL-NP 2000 spectroradiometer) and the active area of the reactor was approximately 50.3 cm2 . The external quantum yield was then calculated by the following Equation.

The ball-milling-driven exfoliation of the pristine bulk GCN to UGCNPs is schematically shown in Fig. 1(a) and (b) (see Experimental Section). Samples of bulk GCN were first prepared by using melamine as precursors and UGCNPs were synthesized by a facile ball-milling process. Since the ball-milling technique has been reported to capably induce the cleavage of C-C bonds and simultaneously achieve  doping and exfoliation in graphene [29–32], it is reasonable to infer that GCN could be cut and exfoliated by ball milling as GCN also has a similar 2D layered structure except that hydrogen bonding rather than weak van der Waals force exists between neighboring layers [24, 33, 34]. Therefore, the stainless steel balls rotating at 500 rpm should generate sufficient energy to cleave the bulk sheets into nanopieces and break the interlayer stacking, forming suspensions of exfoliated GCNs where UGCNPs could be obtained after centrifugation. Intriguingly, the color of GCN turned from yellowish to white after ball milling (Fig. S1 in the Electronic Supplementary Material (ESM)), implying a change in the electronic structure of UGCNPs as compared to that of bulk GCN. 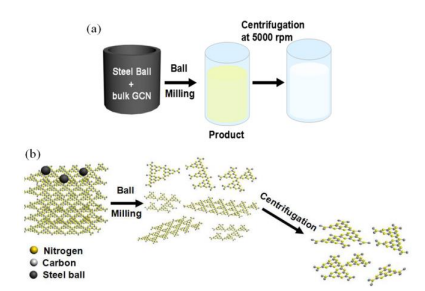 Figure 1 (a) Scheme of the preparation process. (b) Cartoonic illustration of the physical exfoliation of the bulk GCN by ball-milling resulting in the formation of UGCNPs. Yellow, gray and black spheres stand for nitrogen atoms, carbon atoms and steel balls, respectively. 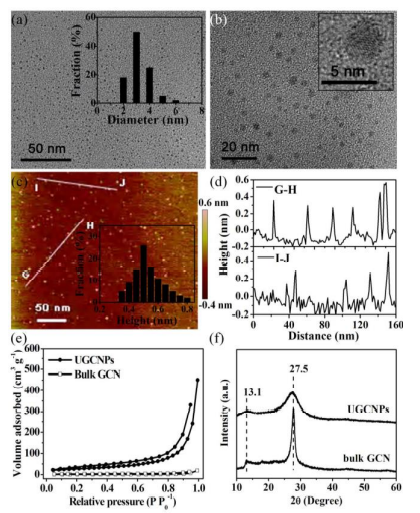 Figure 2 (a, b) TEM images of UGCNPs under different magnifications. (c) An AFM image of UGCNPs on the Si substrate. (d) Height profiles along the lines in (c). (e) N2 adsorption isotherms and (f) XRD patterns of the bulk GCN and UGCNPs. The insets in (b) and (c) show the size and height distributions of UGCNPs. Scale bars are 50 nm, 20 nm, 50 nm in (a), (b) and (c), respectively. 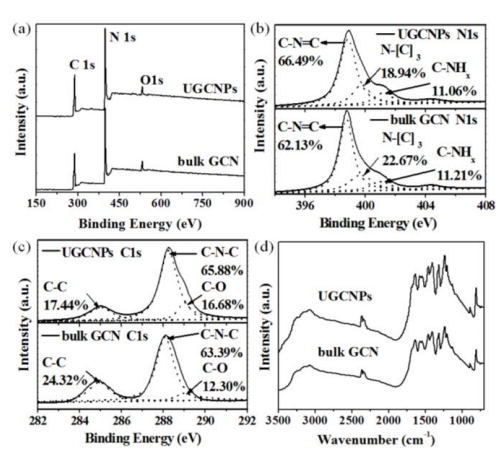 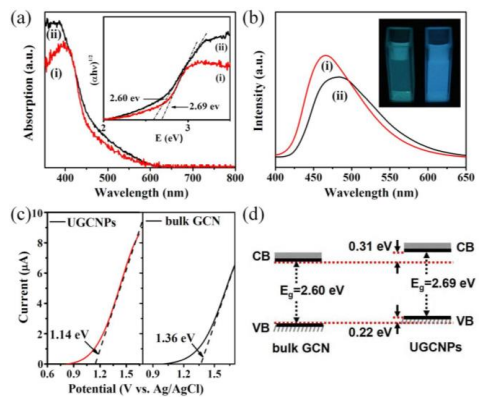 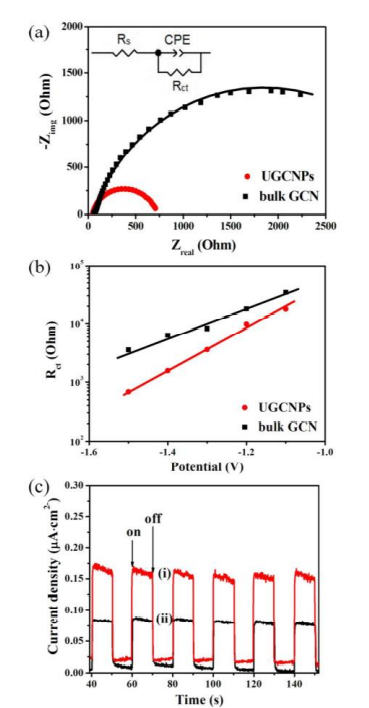 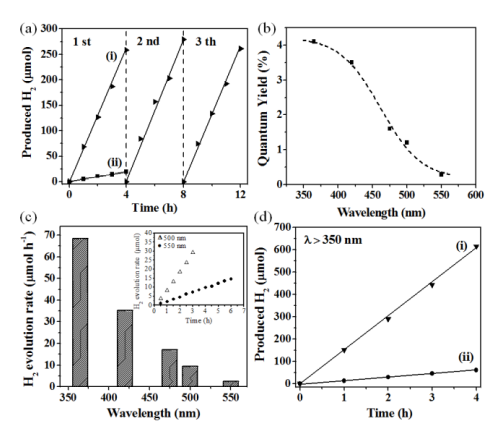 [a] All photocatalysts listed were loaded with 3 wt% Pt co-catalyst except GCN (S-doped) and GCN nanosheets2 , which were loaded with 6 wt% Pt co-catalyst. In conclusion, we have developed a simple but effective ball-milling approach for producing ultrathin GCN nanoplatelets, which show unique optoelectronic features different from those of bulk GCN counterparts. The ball-milled nanosheets are of improved electron transfer ability and better aligned energy levels than those of bulk GCN for photocatalytic water splitting, therefore significantly improving the hydrogen evolution rates under visible light. Apart from the use of UGCNPs as a photocatalyst for hydrogen evolution, its unique photoluminescence could also be exploited in optoelectronic devices and biological application such as bio-imaging, bio-labeling, and light-emitting diodes and many other potential applications.