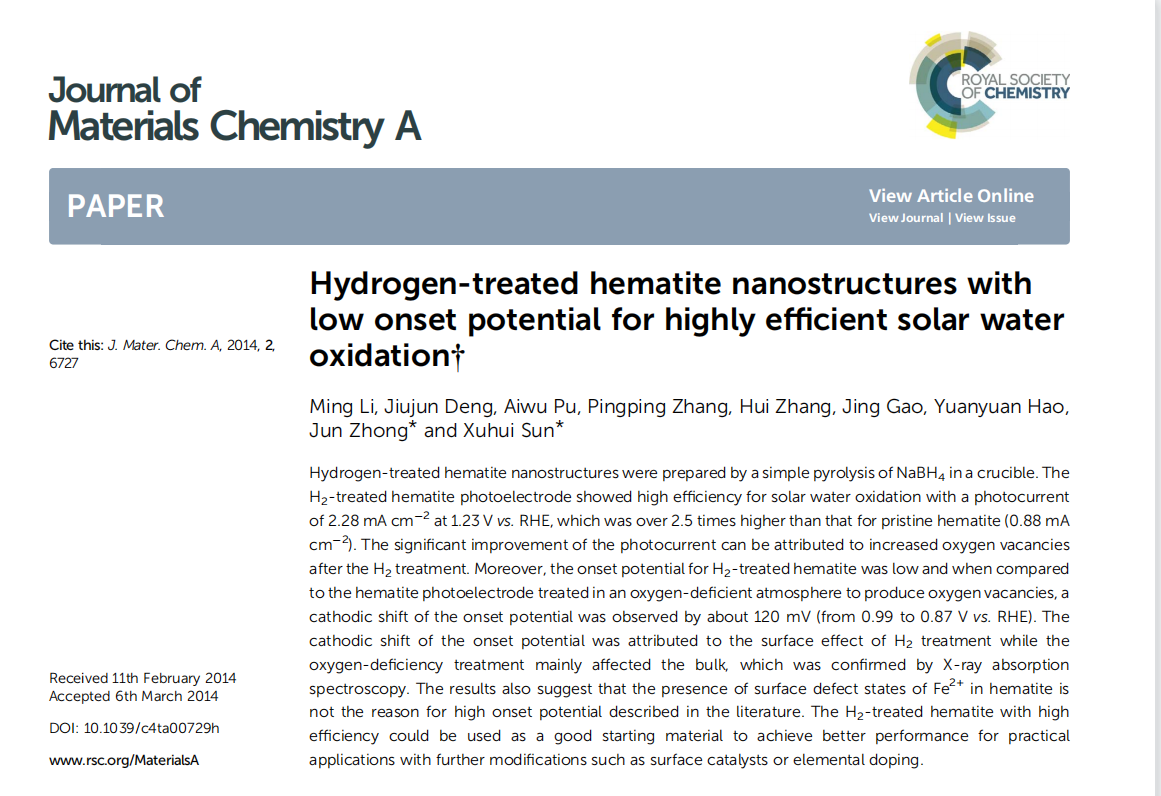 Capacitance was derived from the electrochemical impedance obtained at each potential with 10 000 Hz frequency in the dark. Mott–Schottky plots were generated from the capacitance values. Results and discussion H2-treated hematite nanostructures were prepared by the pyrolysis of NaBH4 in a crucible covered by a uorine-doped SnO2 glass (FTO). The pyrolysis temperature of NaBH4 is about 400  C and at the experimental temperature of 500  C H2 will be released in the pyrolysis process for the H2 treatment of pristine hematite. The amounts of NaBH4 in the crucible can be used to precisely adjust the H2 concentration for oxygen vacancies before the hematite is converted to magnetite. The detailed experiments are described in the Experimental section. Illustration of the experimental setup can be found in ESI, Fig. S1.† Scanning electron microscopy (SEM) images of pristine and H2- treated (optimized with 8 mmol NaBH4) hematite nanostructures are shown in Fig. 1. The SEM images of hematite samples before and aer the H2 treatment are very similar which show a thin lm of vertical nanorods covered on the FTO substrate. The H2 treatment did not change the morphology of the as-prepared hematite sample. The thickness of the H2- treated hematite lm is about 320 nm measured in the SEM cross-sectional image and the result is shown in ESI, Fig. S2.† The dark eld image of transmission electron microscopy (TEM) and the corresponding elemental mappings for H2- treated hematite nanostructures are shown in Fig. 2, which clearly indicate the uniform distribution of Fe and O in the hematite. No obvious carbon coating on the hematite nanorods can be observed from the high resolution TEM images. XRD data for pristine and H2-treated hematite nanostructures with various amounts of NaBH4 are shown in ESI, Fig. S3,† which can be indexed to the characteristic peaks of the typical hematite structure (JCPDS 33-0664) aer subtracting the SnO2 peaks from the FTO substrate.

Fig. 1 SEM images of (a) pristine and (b) H2-treated (8 mmol NaBH4) hematite nanostructures. 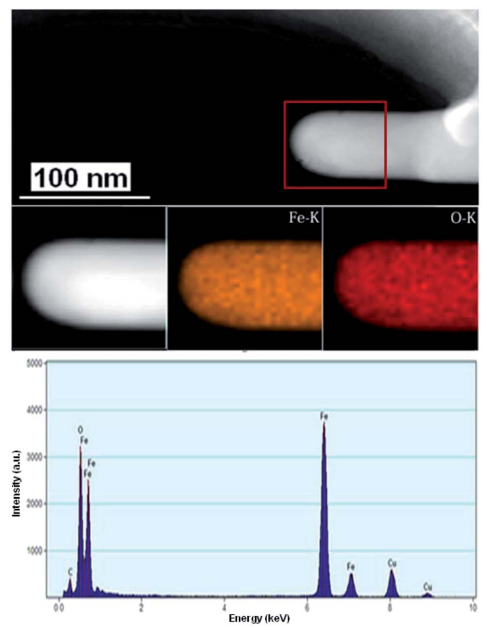 Photoelectrochemical (PEC) measurements were performed in a 1 M NaOH electrolyte (pH about 13.6) using a three-electrode electrochemical cell with hematite nanostructures on FTO as the working electrode, a platinum coil as the counter electrode, and a reference of Ag/AgCl. The photocurrent density– applied potential (J–V) scans for hematite nanostructures were measured with the AM 1.5G simulated solar light at 100 mW cm 2 . In Fig. 3 we show the J–V scans for hematite nanostructures before (black) and aer (green) the H2 treatment (8 mmol NaBH4). For comparison, the J–V scans for hematite nanostructures with oxygen vacancies (red) treated in an oxygen-decient atmosphere during the sintering process (sintered in a partial oxygen pressure of 2.1  10 2 Torr with the optimized performance) are also shown in Fig. 3. Obviously, the curve for pristine hematite before the H2 treatment shows a relatively low photocurrent density of 0.88 mA cm 2 at 1.23 V vs. RHE, while for the H2-treated sample, the photocurrent density at 1.23 V vs. RHE drastically increases to 2.28 mA cm 2 , which is more than 2.5 times higher than that for pristine hematite. The enhanced performance suggests that the effffective H2 treatment by our facile method may introduce oxygen vacancies and then improve the photocurrent. The performance of hematite nanostructures with typical oxygen vacancies but treated in an oxygen-decient atmosphere shows an enhanced performance 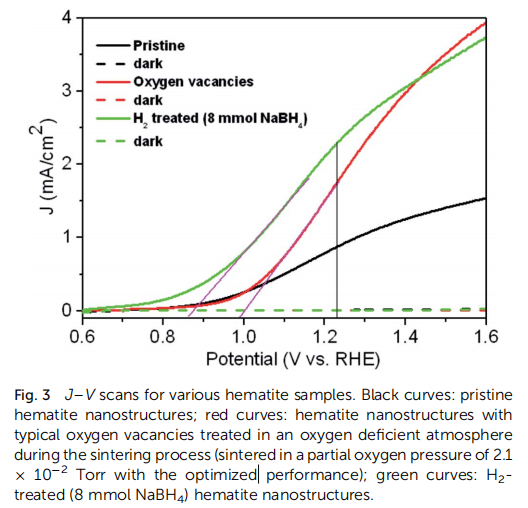 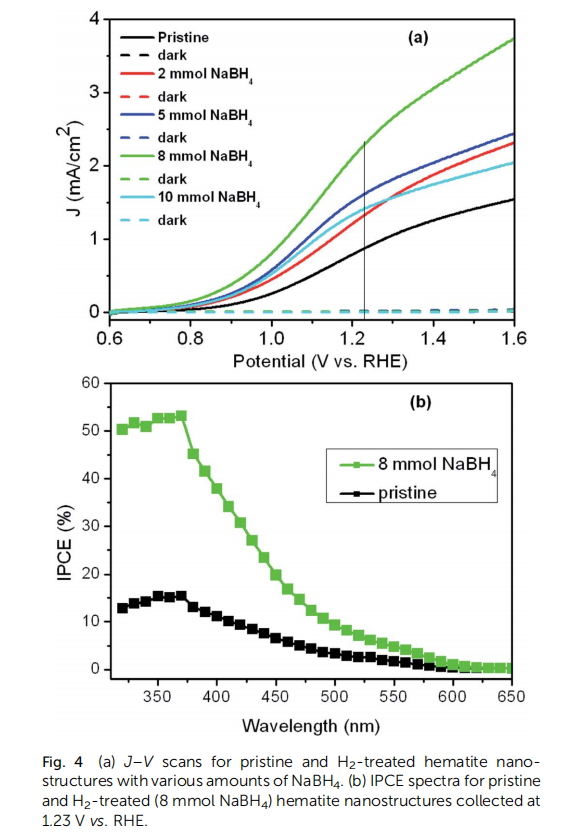 the Mott–Schottky plots are used to estimate the carrier densities using the following equation: Nd ¼ (2/e0330)[d(1/C2 )/dV] 1 where e0 is the electron charge (1.602  10 19 C), 3 is the dielectric constant of a-Fe2O3 (80),16 30 is the permittivity of vacuum (8.854  10 14 Fm 1 ), Nd is the donor density and V is the potential applied at the electrode. Capacitances were derived from the electrochemical impedance obtained at each potential with 10 000 Hz frequency in the dark. The Mott– Schottky slopes of pristine and H2-treated hematite samples are positive which indicates that they are n-type semiconductors with electrons as majority carriers. The carrier densities are estimated from the Mott–Schottky plots.16 The results show that the donor density of the H2-treated hematite sample is 1.88  1020 cm 3 , which is more than one order higher than that of the pristine hematite sample (7.47  1018 cm 3 ). The increased photocurrent for H2-treated samples can be attributed to the increased donor density with oxygen vacancies on the surface.10,17 The increased donor density 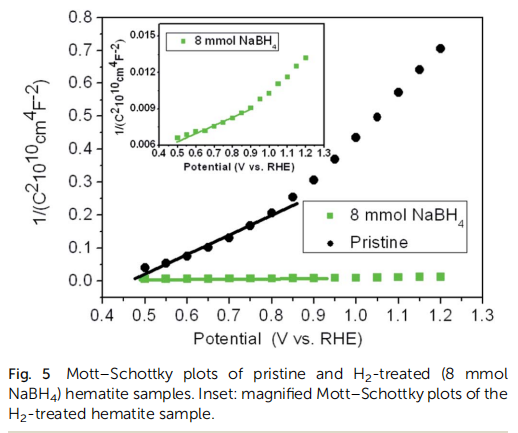 could improve the conductivity and then the surface electrons can be rapidly transferred, which may reduce the recombination of photoexcited holes with electrons and favor for the low onset potential. In order to reveal the mechanism of H2 treatment, X-ray photoelectron spectroscopy (XPS) was employed to elucidate the electronic structure and surface state of H2-treated hematite nanostructures. In Fig. 6 Fe and O signals are strong for both pristine and H2-treated hematite samples. Additional C and Sn signals can also be observed for both samples. The C signal can be attributed to the adsorbed carbon contaminants in the sample preparation process, while the Sn signal stands for Sndoping originated from the Sn diffusion from the FTO substrate.6 Sn-doping in hematite may help for the performance.6 The Fe 2p XPS spectrum of H2-treated hematite nanostructures was also recorded and a small peak for Fe2+ at about 716 eV was observed for the sample standing for oxygen 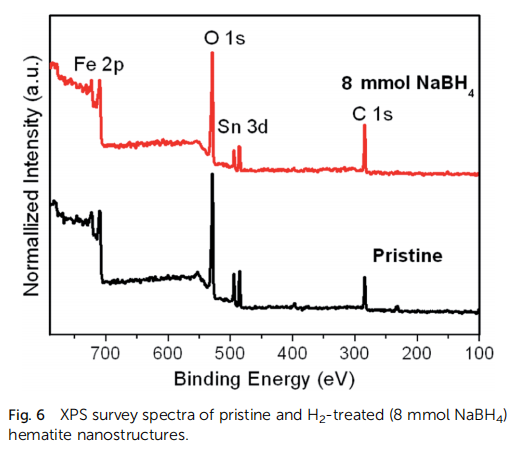 vacancies (ESI, Fig. S6†).10 No B or Na signals can be observed for the H2-treated sample ruling out the effect of B or Na doping from the pyrolysis of NaBH4. To further investigate the electronic structure of H2-treated hematite nanostructures, XAS experiments were performed. XAS is an element-specic spectroscopic technique involving the excitation of electrons from a core level to an empty orbital, and is particularly powerful to obtain structural information of different species. In the near edge region (from just below the edge to  50 eV above the threshold) it is oen referred to as XANES which probes densities of states and local symmetry to be distinguished from EXAFS in the extended region (50 eV up to as much as 1000 eV above the threshold) which contains information about the inter-atomic distance and the local dynamics of the system. XAS spectra of pristine and H2-treated hematite samples at the O K-edge were recorded on the so X-ray beamline at the Beijing Synchrotron Radiation Facility and are shown in Fig. 7a. XANES and EXAFS data at the Fe K-edge of hematite samples have been collected on beamline 14W at the Shanghai Synchrotron Radiation Facility. The Fourier transform of the EXAFS data in R space is shown in Fig. 7b. 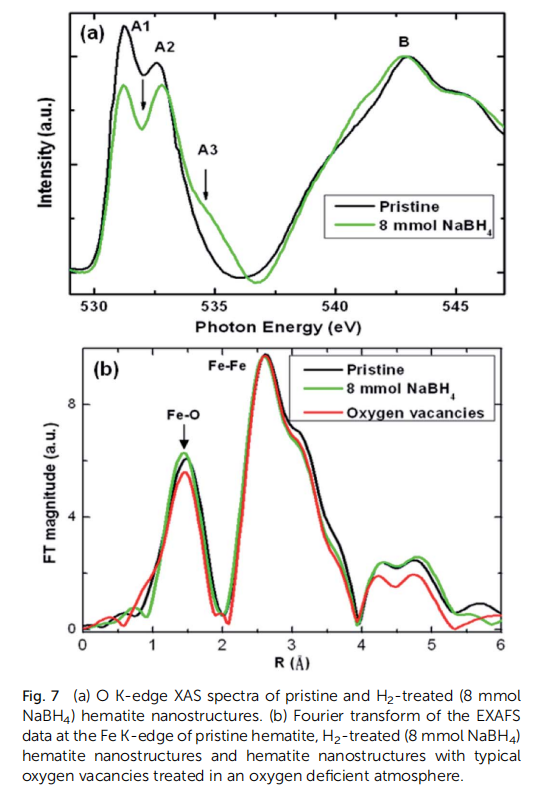 We present the preparation of H2-treated hematite nanostructures by a simple pyrolysis of NaBH4 in a crucible. The H2- treated hematite photoelectrode shows a high photocurrent of 2.28 mA cm2 at 1.23 V vs. RHE, which is over 2.5 times higher than that for pristine hematite. Moreover, when compared to the hematite photoelectrode with typical oxygen vacancies treated in the oxygen-decient atmosphere during the sintering process, a cathodic shi of the onset potential has been achieved by about 120 mV (from 0.99 to 0.87 V vs. RHE). The cathodic shi of the onset potential is attributed to the surface effect of H2 treatment. Our results suggest that the presence of surface defect states of Fe2+ in hematite is not the reason for high onset potential. The H2-treated hematite with high effi- ciency can be used as a good starting material to achieve better performance for practical applications.

We thank Q. Sun for XPS experiments. We thank C. Hong for the support during runs at the BSRF. We thank S. Zhang, Z. Jiang and Y. Huang for the support during runs at the SSRF. We acknowledge the National Basic Research Development Program of China (2010CB934500, 2012CB825800), the National Natural Science Foundation of China (11275137, 11179032, 91333112) and the Priority Academic Program Development of Jiangsu Higher Education Institutions (PAPD). This is also a project supported by the Fund for Innovative Research Teams of Jiangsu Higher Education Institutions.