Over the past years, intense research efforts have been devoted to direct conversion of solar energy to chemical energy by photocatalysis processes, because it is clean and renewable.1−4 This has led to amazing developments of various semiconductor photocatalytic materials, especially ultraviolet (UV) and visible (Vis) light-responsive photocatalysts that can efficiently utilize the abundant solar energy.5−8 It is well known that visible light accounts for nearly 50% of solar light energy, while the residual 7% and 43% are made up of UV light and infrared (IR) light, respectively. Thus, compared to the great amount of work done in the UV and Vis light range, IR light, which constitutes almost half the solar energy, has been overlooked and rarely used. To the best of our knowledge, only a very limited number of materials with IR light-driven photocatalytic activity have been developed to date, such as carbon-doped TiO2, NaYF4:Yb, Tm/CdS, Cu2(OH)- PO4,Bi2WO6, black TiO2, dye-sensitized g-C3N4, etc.9−14 Among the studied IR light photocatalysts, most are upconversion materials, which possess a very narrow absorption band and cannot use sunlight efficiently. Very recently, it is interesting to note that there are a few reports on H2 production by photocatalytic processes under near-infrared (NIR) light irradiation. For example, Yang and co-workers15 broke through the restriction of standard reaction mechanism of water splitting and proposed a new photosynthesis mechanism for producing H2 in which NIR light can be used. The new reaction model was verified in surface-functionalized hexagonal boron−nitride bilayers by electronic and optical calculations. Tachikawa and co-workers16 reported that Pttipped Au nanorods show strong absorption at 700−1200 nm and exhibit efficient photocatalytic H2 evolution under Vis− NIR light. Li and co-workers17 used a highly asymmetric zinc phthalocyanine derivative (Zn-tri-PcNc) as the sensitizer of gC3N4 for extremely efficient NIR light-driven photocatalytic H2 production. The sensitizer Zn-tri-PcNc can remarkably extend the spectral response region of g-C3N4 from ∼450 nm to more than 800 nm. Although none of them focused on wavelengths longer than 760 nm, these studies present a promising future for NIR light-driven photocatalysis, and therefore, developing new NIR light responsive photocatalysts is highly desirable for further investigation of photocatalysis.

In order to extend the spectral response of wide band gap oxide semiconductors toward the long-wavelength region, many attempts have been made, such as photosensitizing, doping, and heterogenization.18−20 It has been addressed that, for Vis and NIR light-induced photocatalytic utilization, nitrogen doping is proposed to be an effective and especially active means since the study of Asahi et al.21−24 Besides nitrogen doping, oxygen vacancies (OV) have been widely used for narrowing optical band gap, and some recent reports mainly focus on TiO2, ZnO, In2O3, BiOCl, and so on.25−28 These studies show that the OV can induce a new in-gap band that can increase Vis light absorption, leading to enhanced photocatalytic activity. Compared to conventional cation doping, OV as self-doping, without introduction of any impurity elements, is more favorable for preserving the intrinsic crystal structure of semiconductors.

The physicochemical properties of titanate- and indiumbased mixed oxide semiconductors, such as SrTiO3, BaTiO3, CaTiO3, In1−xNixTaO4, CaIn2O4, and In2TiO5, have been investigated in great detail because of both fundamental scientifific knowledge and their widespread technological applications in various fifields. Some of them display good photocatalytic activity and chemical stability.29−33 Recently, the ternary In2TiO5 (abbreviated as ITO) has been extensively studied as a new class of photocatalyst, which was reported to show excellent activity for water splitting or dye degradation.34−36 In2TiO5 contains both early transition metal (d0 ) and p-block metal (d10) that fulfill desirable criteria required for active photocatalysts. It possesses a three-dimensional tunneling structure, which is built by octahedral [TiO6] and [InO6] motifs (Figure 1b). It has been addressed that the [InO6] octahedron in the crystal structure is benefificial for mobility of charge carriers, thus improving the photocatalytic activity.32 Unfortunately, due to the larger energy band gap of ITO, almost all reported works focus on its UV and Vis light-driven photocatalysis. So far, there are no investigations concerning its NIR light-induced photocatalysis.

Herein, we use a facile strategy, OV and nitrogen doping engineering, to accomplish NIR light-induced photocatalysis of ITO for H2 production from water. The OV, N-doped In2TiO5 (OV,N−In2TiO5) sample was prepared by annealing pristine In2TiO5 in NH3 atmosphere at 600−700 °C for 2 h. OV and Ndoping have evidently changed optical properties and energy band structure of ITO, which has been confifirmed by UV−vis− NIR optical spectroscopy and density functional theory (DFT) calculations. The photocatalytic performance of OV,N− In2TiO5 was evaluated by measuring photocurrent response and photocatalytic H2 production under NIR light irradiation. To the best of our knowledge, this represents the fifirst case of realizing NIR photocatalysis of In2TiO5 for H2 evolution with Pt as a cocatalyst.

Synthesis of Pristine In2TiO5. InCl3 (0.4 mmol) and Ti(C4H9O)4 (0.2 mmol) were added to a nitric acid aqueous solution (10 mL, 1 mol·L−1 ), which was stirred to form a transparent solution. ED2Na (0.66 mmol) was dissolved in distilled water (10 mL) to form a ED2Na solution, which then was added into above mixed salt solution drop by drop. After the solution was stirred for 30 min, the pH value of the mixed solution was adjusted to 5. The solution was then heated at 70 °C in oil bath for ∼30 h until a gel was obtained. The resultant gel was transferred into a combustion boat and calcined at 250 °C for 10 h in a tubular furnace. After cooling, the product was collected and calcined for the second time at 950 °C for 2 h. Pristine In2TiO5 was fifinally obtained after the tube furnace was cooled to room temperature naturally; this product was denoted as ITO.

For comparison, another two In2TiO5 photocatalysts were prepared by annealing ITO powder at 600 and 700 °C in the tubular furnace for 2 h in H2 atmosphere, which were named ITOH600 and ITOH700, respectively. 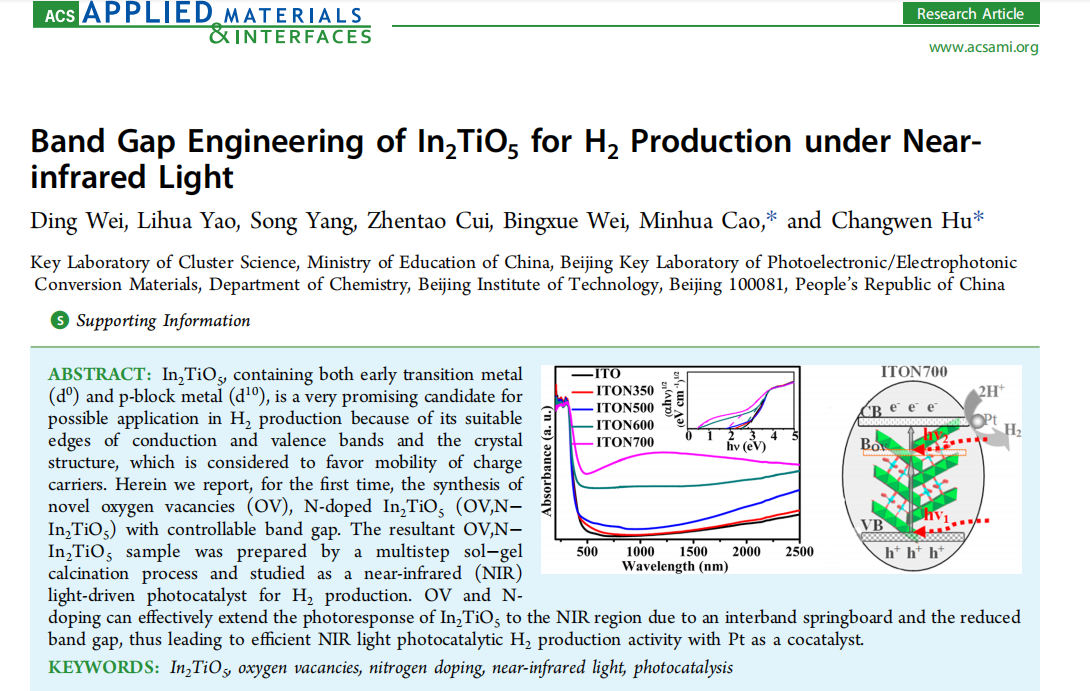 Theoretical Calculations. Electronic structures of pristine, N-, OV-, and OV,N-In2TiO5 were investigated within DFT as implemented in the CASTEP code, using exchange−correlation functional in the CA-PZ form of local density approximation (LDA). The electron−core interaction was represented via ultrasoft pseudopotentials with a plane-wave basis cutoff energy of 420 eV. The electronic exchange−correlation energy was treated within the framework of LDA. The self-consistent fifield (SCF) tolerance was all 5 × 10−6 eV/atom. Fast Fourier transform (FFT) grids of basis in all models were 75 × 18 × 75. The κ-point sets of 1 × 6 × 1 were used for all models. The doped nitrogen and oxygen vacancies were located at a substitutional site for an O atom in the In2TiO5 crystal.

Photocatalytic H2 Production by Near-infrared Light. NIR light photocatalytic H2 production was performed with 0.04 g of photocatalyst suspended in 50 mL of methanol aqueous solution (25 vol %) in a closed circulation system by use of a xenon arc lamp (300 W, CEL-HXF300, Jinyuan) with a shutter window and a Vis-light cutoff filter (800 nm filter). H2PtCl6·6H2O aqueous solution (1 mL, 1 mg of Pt·mL−1 ) was dripped into the system to load Pt onto the surface of the photocatalyst by a photochemical reduction deposition method. The amount of H2 was analyzed on a gas chromatograph (N2000, Zhejiang University) equipped with a thermal conductivity detector (N2 carrier), which was connected to the gas circulating line. Detailed schematics of the equipment, optical spectrum analyzer, and emission spectrum of the light source are shown in Figures S2−S4 in Supporting Information.

The typical preparation process for OV,N-In2TiO5 photocatalyst is based on a multistep sol−gel calcination method. Pristine ITO was fifirst obtained by a sol−gel process, followed by a high-temperature treatment in air, which then was subjected to an ammonifying process in NH3 at difffferent temperatures. Clearly, with an increase in the NH3-treated temperature (Figure 1a), the color of the samples gradually becomes dark gray, and this change may be partially due to bulk reduction of the ITO crystal by hydrogen from thermal decomposition of NH3 at high temperature.37 The crystal structure of the products before and after ammonifification was characterized by X-ray diffffraction (XRD) measurement. As shown in Figure 1a, for the sample before ammonifification, all of the diffffraction peaks can be indexed to a pure orthorhombic ITO phase (JCPDS ICDD 82-0326), which contains octahedral [TiO6] and [InO6] in a unit cell (Figure 1b).38 If we changed the preparation conditions, such as complexing agent, pH value, and so on, impure ITO sample or unidentifified mixtures would be formed (Figure S1). In addition, all the NH3-treated samples still retained the orthorhombic ITO phase and no other byproducts, such as nitrogen-containing compounds, were detected from the XRD results. To further investigate the effffect of ammonifification temperature on the composition of samples, Fourier transform infrared (FT-IR) measurements were performed. It can be seen that no hydrocarbon peaks and amine complexes are observed (Figure 1c).39

As identifified by scanning electron microscopy (SEM) in Figure 2a,b, the above as-synthesized ITO and ITON700 samples all consist of irregular rodlike submicrostructures and ammonification has almost no effffect on the morphology and size of the samples. CHN elemental analysis (Table S1) proves the presence of 0.3 wt % N in ITON700 and 0.11 wt % N in ITON600. However, for ITON350 and ITON500, N 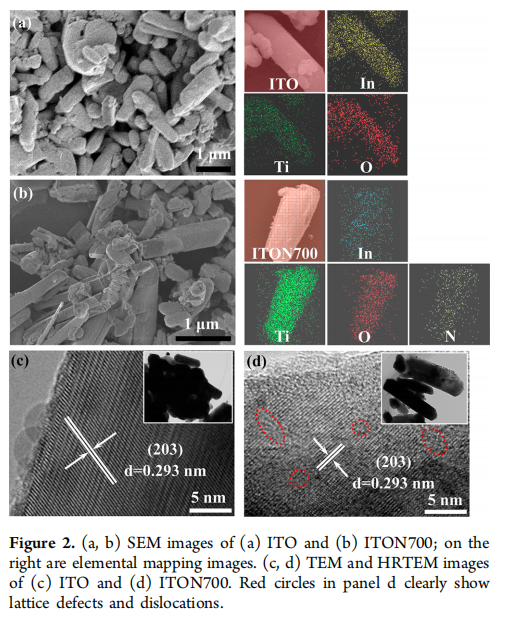 contents are as low as 0.05 and 0.08 wt %, respectively, which are already beyond the detection limit of 0.1% for the instrument, indicating few N were incorporated into ITO matrix when the NH3 treatment temperature was lower than 500 °C. The homogeneous distribution of N element on the surface of ITON700 was also confirmed by elemental mapping images (Figure 2b). Figure 2c,d show high-resolution transmission electron microscopy (HRTEM) images of ITO and ITON700, which are taken randomly from any areas. It can be seen that, for ITO, perfect lattice fringes without any defects are obtained, suggesting good crystallinity within the grains or at the grain boundaries. 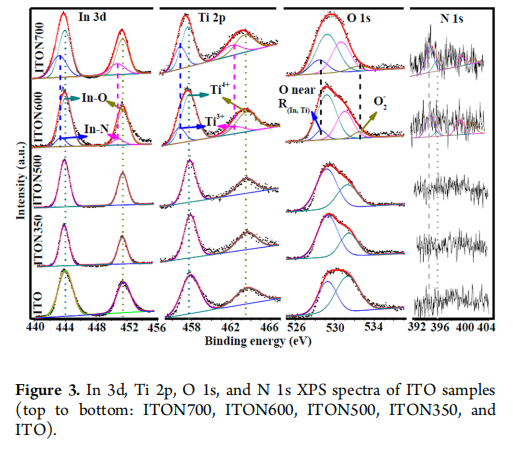 However, some clear lattice defects and dislocations can be clearly observed in the well-defined crystalline structure of ITON700 (marked in red circles), demonstrating a novel defect-rich structure in the sample.40 Surface elemental components and valence states of the assynthesized ITO samples were further determined by X-ray photoelectron spectroscopy (XPS) measurements, as shown in Figure 3. For ITON600 and ITON700 samples, the N 1s XPS spectra both exhibit four peaks at around 395.1, 396.3, 400.3, and 402.1 eV. The fifirst two peaks can be attributed to TiN and O−In−N linkage, respectively, whereas the other two weak peaks are related to molecularly chemisorbed γ-N2. 24,41,42 On the contrary, for ITO, ITON350, and ITON500, no evident.