A series of mesoporous BiOBr–activated carbon (AC) composite photocatalysts with different content of AC were synthesized by an in situ loading solvothermal method. The obtained samples were characterized by scanning electron microscopy (SEM), X-ray diffraction (XRD), Brunauer–Emmett–Teller (BET) surface area and UV/vis diffuse reflflectance spectrum (DRS). Results showed that the composite samples exhibit higher BET values and stronger adsorption ability for organic pollutants. Moreover, the existence of AC inflfluenced the size of BiOBr deposited on ACs. High photocatalytic activity was observed for the degradation of the heteropolyaromatic dye methylene blue (MB) under both UV and visible light irradiation. Additionally, the results indicated that there was an optimum AC amount of 80% for obtaining the highest photocatalytic activity.  2013 Elsevier Ltd. All rights reserved.

1. Introduction Photocatalysis has been a great potential technology in environment management and clean energy exploitation. It has attracted widespread concentration in the past several decades. TiO2 has been widely employed for photocatalytic applications, and a lot of progresses have been achieved [1–5]. However, TiO2 can only be activated by the ultraviolet light (k < 380 nm), which is only about 4% of the solar spectrum [6,7]. Considering visible-light accounts for 43% of the solar spectrum, the development of effificient visible-light-driven photocatalysts is becoming attractive and much effort has been devoted into this area [8–10]. To date, many oxides containing bismuth (Bi) have been found that they have high photocatalytic activity under visible light irradiation, such as Bi2WO6, BiVO4, Bi2MoO6 [11]. And in recent years, bismuth oxide haloids (BiOXs, X = Cl, Br, I) have become one of the focused materials in the fifield of photocatalysis [12,13]. BiOXs have a layered structure consisting of alternately arranged [Bi2O2] 2+ mono layer and dual X layers [14]. This layered structure favors the separation of photo-induced electron–hole pairs, therefore BiOXs usually show excellent photocatalytic activity. Many research achievements have been achieved in the fifield of BiOBr [15–26]. For example, Huo’s group synthesized hierarchical flflower-like BiOBr microspheres assembled with nanosheets, which had high photocatalytic activity under visible-light irradiation [27]. Also, BiOBr nanosheets-assembled microspheres prepared by Zhang and coworkers exhibited both strong adsorption ability and excellent photocatalytic activities for MO, RhB and phenol [28]. These contents revealed that BiOBr would be a promising photocatalyst in the treatment of organic pollutions. At the same time, activated carbon (AC) is well known as one effificient support, due to its stability, mechanical resistance, high surface area and optimum porosity [29]. AC was also an effective adsorbent for the removal of a variety of organic pollutants. Therefore, the property of photocatalyst will be improved after be composited with AC [30–32]. So in this paper, the purpose is to fifind a way to synthesize BiOBr–AC composite photocatalysts with better photocatalytic activity. Then, the effect of AC on the performance of the composite photocatalysts was investigated to fifind an optimal condition. Therefore, the BiOBr–ACs were prepared by an in situ loading solvothermal method. The physical properties and photocatalytic activity of the as-prepared composite photocatalysts with different weight percentages of AC were studied. 2. Experimental setup 2.1. Synthesis All chemicals involved were analytical grade and used without further purifification. BiOBr–ACs was prepared by an in situ loading solvothermal method. In a typical experiment for obtaining BiOBr–AC with 5 wt% AC, 0.0610 g AC was added into 80 mL ethylene glycol (EG) and ultrasonic treated for 90 min. Then, 4 mmol Bi(NO3)3 5H2O and 4 mmol KBr were added into the above suspension. The suspension was stirred for 40 min at room temperature. Then, the suspension was transferred into a 100 mL Teflflon-lined autoclave, and maintained at 160  C for 20 h. The fifinal products were collected and washed thoroughly with anhydrous ethanol and deionised water after cooling to room temperature naturally. Finally, the samples were dried in air at 60  C for 2 d. Other samples were prepared by the same procedure just with addition of different AC weight. For comparison, pure BiOBr powder was also prepared by the same method just without the addition of AC. 2.2. Characterization The X-ray diffraction (XRD) pattern of the samples were measured on a diffractometer using monochromatized Cu K-beta radiation under 40 kV and 100 mA and scanning over the range of 15 6 2h 6 80 . The surface morphologies and microstructures of the prepared samples were observed by scanning electron micrograph (SEM), using Hitachi S-4800 scanning electron microscope. The optical absorption property of catalysts was characterized by a UV–vis spectrometer (UV3600, SHIMADZU). Brunauer–Emmett–Teller (BET) surface areas measurements were carried out by N2 adsorption at 77 K using an ASAP2020 instrument. 2.3. Photocatalytic experiment Photocatalytic activity of the samples was evaluated by degradation of MB under the irradiation of ultraviolet (UV) and visible light. CEL-HXF300 Visual Light Source and CEL-HXUV300 Ultra Violet Light Source were used in the present experiments.

In every experiment, 0.01 g sample was added into 100 mL MB solution (30 ppm). The suspension was ultrasonic treated for 2 min, and then it was stirred for 30 min in dark before light irradiation. At 15 min intervals, about 2 mL suspension was sampled and centrifuged. Finally, the UV/vis adsorption spectra of the centrifugated solutions were analyzed using a UV–vis spectrometer (UV3600, SHIMADZU). 3. Results and discussion 3.1. Characterization of BiOBr–AC composites 3.1.1. X-ray diffraction (XRD) The as-prepared BiOBr–ACs with different AC amounts were fifirstly analyzed by XRD (Fig. 1). It showed that all the diffraction peaks of composites are consistent with the pure BiOBr, demonstrating the high purity and single-phase of the as-prepared samples. The results indicate that AC does not inflfluence the crystal phase of BiOBr. Furthermore, it should be noted that the peak of pure BiOBr at about 32 is apparently stronger than that of all composite catalysts. The results indicated that the existence of AC would affect the crystallization of BiOBr in the composite samples, and induce to smaller crystal sizes.

3.1.2. Scanning electron micrograph (SEM) The SEM images of the resulting products are presented in Fig. 2. It can be seen that the pure BiOBr is hierarchical 3D flflower-like microspheres with diameters of about 1 lm. The microsphere is composed of many radially grown nanoflflakes with a thickness of about 10 nm (Fig. 2a). As to the BiOBr–ACs, lots of hierarchical 3D flflower-like microspheres are loaded on the surface of AC (Fig. 2b–g). The crystal size of as-prepared samples tends to decrease with the increasing AC amount. The results suggest that AC played a role in the growth of BiOBr crystal, and they are basically in agreement with the XRD data. Furthermore, the surface area which cannot deposited by BiOBr tends to increase as the AC content increasing. At the beginning of solvothermal reaction, BiOBr nucleus formed on the AC, and then further growed to nanosheets or nano- flflakes as the reaction time increased. These thin nanosheets or nanoflflakes were benefifit to enhance the separating effificiency of the electron–hole, which would result in high photocatalytic performance. With further reaction, they would loosely assembled to hierarchical 3D flflower-like microspheres and then become tight gradually. 3.1.3. UV/vis diffuse reflflectance spectrum (DRS) The DRS of the as-prepared samples were shown in Fig. 3, which was used to investigate the optical properties of as prepared samples. It can be seen that all BiOBr–AC composites had stronger optical absorption than pure BiOBr in the visible light region. The adsorption intensity in UV region of pure BiOBr is far stronger than that of BiOBr–AC composites, and the value tend to decrease very slightly with the increasing AC content from 5% to 40%. However, there is no evident red shit or blue shit of the absorption band of BiOBr. 3.1.4. Brunauer–Emmett–Teller (BET) surface area The nitrogen adsorption–desorption method is used to study the Brunauer–Emmett–Teller (BET) specifific surface area of the as-prepared samples. The obtained data for all samples were shown in Table 1. It can be seen that all BiOBr–AC composites had higher values than pure BiOBr, which was due to the existence of AC. And the BET surface area increased gradually with the increasing AC content from 0% to 40%. Fig. 4 showed the nitrogen adsorption–desorption isotherm of the BiOBr–ACs, which corresponded to type IV with hysteresis loop, indicating that they were mesoporous materials. 3.2. Photocatalytic activities In order to evaluate the photocatalytic activity of the obtained samples, photodegradation experiments of MB dye were conducted under UV and visible irradiation conditions and the results were shown in Fig. 5. From the fifigure, the adsorption and photocatalytic ability of as-prepared samples enhanced gradually with the increasing content of AC from 10% to 80%. The trend are in good accordance both under visible and UV light irradiation conditions. And it should be noted that the pure BiOBr had stronger adsorption and photocatalytic ability than BiOBr–10%AC while weaker than the others. The effificiency of BiOBr–ACs on the degradation of MB can reach up to 85.70% for visible irradiation and 98.12% for UV irradiation when the content of AC is 80%, which is the optimum 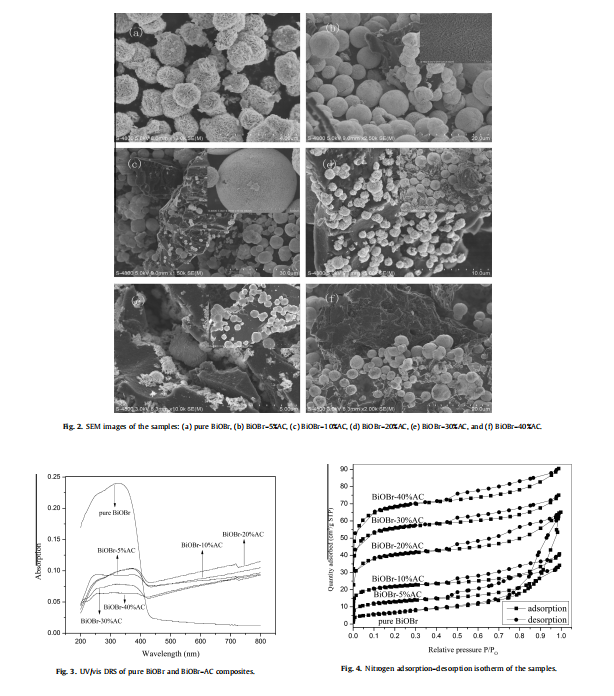 4. Conclusions In summary, a series of mesoporous BiOBr–ACs photocatalysts with flflower-like structures were synthesized by an in situ loading solvothermal method. The XRD results showed that AC would affect the crystallization of the samples, but it had no inflfluence on their crystal phase. Results suggest that AC had inflfluence on the optical absorption ability and the crystal size. Samples had higher BET surface areas and exhibited stronger adsorption ability when AC content increased. And the as-prepared samples showed stronger photocatalytic activity when AC content increased from 10% to 80%. The effificiency of BiOBr–AC on the degradation of MB can reach up to 85.70% and 98.12% under visible irradiation and UV irradiation, respectively. Acknowledgements We are grateful for grants from the National Key Basic Research Development Program (‘‘973’’ Project) of China (No. 2010CB429006), National Science Fund for Distinguished Young Scholars (No. 51225901), the National Natural Science Foundation of China (No. 51108158), Major Science and Technology Program for Water Pollution Control and Treatment (2012ZX07101-008), the Research Fund for the Doctoral Program of higher Education of China (51199611), The outstanding youth fund of Jiangsu Province (BK2012037).