As a semiconductor photocatalyst, TiO2  has been extensively  investigated for decades because of its outstanding stability,  environmental friendliness and low cost.1-3 Many efforts have  been made to improve its photocatalytic efficiency by  extending its absorption to visible light or promoting  photogenerated electron-hole separation on its surface. 4-6 Especially, improving absorption in visible range is very  important for application considering that only about 4% solar  light can be used to excite TiO2.7  Since Asahi et al.  demonstrated band-gap narrowing and high photocatalytic  activity under visible light of nitrogen doped TiO2,8  non-metal  doping has been widely applied to modify band-gap structure  of TiO2  to initiate visible light activity9.

In addition to nitrogen10, 11, carbon has also been well  accepted as an efficient doping element to make TiO2  sensitive  to visible light. Khan12 et al. firstly reported that TiO2–xCx  (x ~  0.15) absorbed light at wavelengths below 535 nm and  performed water splitting at an applied potential of 0.3 V.  Sakthivel and Kisch found good photocatalytic property of  carbon doped TiO2  in degradation of 4-chlorophenol under  diffuse indoor daylight.13 Various methods have been  developed to synthesize carbon doped TiO2  and enhanced  visible light activity of the doped photocatalyst has been verified by many groups subsequently.14-18 Among these  methods, heating precursor containing carbon species is the  most commonly used one for doping TiO2  with carbon19-21 .  However, the existing states of carbon in these photocatalysts  have triggered a lot of arguments. Carbon was proposed to  substitute a lattice atom in some reports,12, 15, 22 while  interstitial carbon atoms were believed to dominate in other  works.16, 23 Recently, Kisch and co-workers have attributed the visible light activity of some “carbon-doped” TiO2  to the  sensitization of TiO2  by aromatic carbon compound.24 Moreover, no visible activity or detrimental effect of C doping  on photocatalytic activity of TiO2  under UV light was observed  in some cases.25-27

Herein we report an easy way to fabricate carbon doped  TiO2  with high photocatalytic activity for hydrogen production  via fast combustion of organic capping reagents. During  surface modification of TiO2  with carbon via heating  oleylamine wrapped ultrathin TiO2  nanosheets,28 we noticed  that elevating calcination temperature or heating rate in air  would dope carbon into TiO2  lattice. By varying the  temperature ramp-up rates, we prepared several carbon  doped TiO2  photocatalysts. A high and stable hydrogen  generation rate was observed on those prepared under a high  heating rate, which benefits fast combustion of oleylamine  ligands. In contrast, those prepared under a low heating rate  exhibited a relative low activity under UV light and no activity  under visible light. We think fast and slow combustion of  oleylamine ligands may lead to different carbon doping states  in the final products.

Materials  The following chemicals were used as received without further  purification. Titanium (IV) isopropoxide (Ti(OC3H8)4 , 95%) was  purchased from Alfa Aesar. Oleylamine (OAm, 70%) was  purchased from Sigma Aldrich. NaOH (≥96.0%), H2PtCl6  (Pt  ≥37.0%), Na2SO4  (>99%), ethanol (>99.7%), methanol (>99.5%)  and hexane (>97%) were purchased from Sinopharn Chemical  Reagent Co., Ltd. Deionized water was purified by using a highpurity water system (Millipore Milli-Q, resistivity>18.2 MΩ·cm)  before it was used.  Synthesis of carbon-doped TiO2  nanomaterials.  Oleylamine wrapped ultrathin TiO2  nanosheets were first  synthesized by a thermal decomposition method reported  previously.28 Carbon-doped TiO2  nanomaterials were then  prepared by calcining the as-obtained TiO2 -oleylamine  nanosheet precursor in a muffle furnace (F47920-33-80,  Thermo Scientific Co., USA) at different temperatures in air.  For fast heating rate, TiO2 -oleylamine precursor was placed  into the muffle furnace which was preheated to certain  temperature, and then calcined for 0.5 (500 °C) or 1 h (400 °C).  The samples produced via fast combustion are designated by  F-500-0.5 and F-400-1, respectively. For normal heating  process (low heating rate), the precursor was firstly heated to  300 °C at a ramp rate of 10 °C min-1, held for 1 h, then heated  to 450 or 500 °C and help for 1 h. The corresponding samples  are denoted as N-300-450 and N-300-500, respectively.  Preparation of Pt-loaded photocatalysts  Approximately 50mg of carbon-doped TiO2  materials was  suspended with sonication in 8 mL of deionized water and 0.8  mL of H2PtCl6  (10 g L-1) aqueous solution. The pH value of the  solution was adjusted to 12 by 10 M NaOH solution. Then the  suspension was stirred at 50 °C for 5 h under ambient  atmosphere, followed by adding 2 mL of methanol and irradiated using a 300 W Xenon lamp for 2 h (~ 600 mW cm-2 ,  CEL-HXF300, Beijing Aulight Co., Ltd.). The Pt-loaded  photocatalysts were washed with water and ethanol and  centrifuged, followed by drying in an electric oven at 60 °C for  overnight.  Photocatalytic hydrogen generation  An online photocatalytic hydrogen generation system (AuLight,  Beijing, CEL-SPH2N) was used to conduct the photocatalytic  hydrogen evolution experiments at ambient temperature (25  °C). In a typical photocatalytic experiment, 50 mg of Pt-loaded  photocatalyst was suspended in 100 mL of aqueous solution  containing 40% of methanol in volume. Prior to irradiation, the  suspension was degassed with vacuum pump for 10 min to  completely remove the dissolved oxygen and to assure the  reaction system in an inertial condition. A magnetic stirrer was  applied at the bottom of the reactor to keep a good dispersion  of the photocatalysts throughout the whole experiment. The  hydrogen evolved was analysed by gas chromatograph (GC)  using a thermal conductivity detector (TCD) with nitrogen as a  carrier gas. Once the photocatalytic reaction of a testing cycle  in 5 h was finished, the reactor was replenished with 2 mL of  methanol and degassed in vacuum before starting the subsequent cycles. The above mentioned Xenon lamp (300 W,  a total light intensity of 600 mW cm-2) was used as simulated  light source. Visible light was acquired by equipping Xenon  lamp with a 400 nm longpass filter (UVCUT400, AuLight,  Beijing, λ>400 nm, ~ 550 mW cm-2). The apparent quantum  efficiency (QE) was measured under the same photocatalytic  reaction conditions with a 365 nm (~ 90 mW cm-2) and a 420  nm band-pass filter (~ 30 mW cm-2). The QE was calculated  according to the following equation: 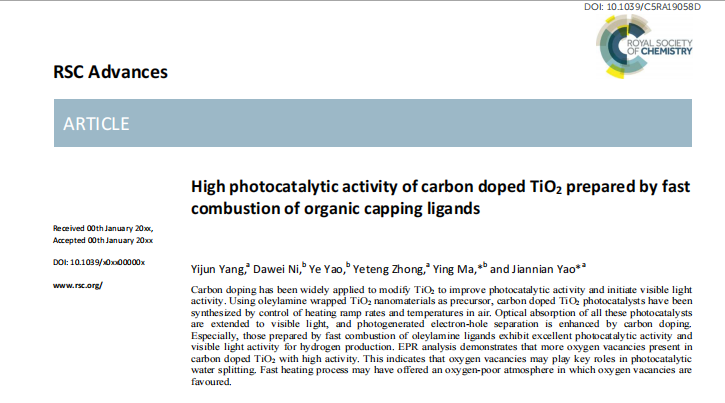 Transient photocurrent response was performed on a Zennium  electrochemical workstation (ZAHNER, Germany) in a standard  three-electrode system with the as-prepared samples as the  working electrodes with an active area of ca. 1 cm2 , a Pt wire  as the counter electrode and Ag/AgCl (saturating KCl) as the  reference electrode, which includes a UV light source (365 nm)  and the corresponding control system. 1 M Na2SO4  aqueous  solution was used as the electrolyte. For working electrodes,  FTO glass (2cm × 1.2 cm) was immersed in an ethanolic  dispersion of carbon-doped photocatalysts and followed by  drying in the air. This process was repeated several times until  the coated photocatalyst reaches ca. 0.4 mg cm-2 on FTO glass.  The amperometric I-t curves were recorded under an  illumination of 10 mW cm-2 for three 50 seconds light-on-off  cycles.

The morphologies of carbon-doped photocatalysts were  observed by transmission electron microscopy (TEM) images  recorded using a JEOL JEM1011 TEM operated at 100 kV and  high-resolution TEM (HRTEM) images recorded on a JEOL 2010F operated at 200 kV. Samples were prepared by drop casting a dispersion drop on a 300 mesh carbon-coated copper  TEM grid followed by drying at ambient atmosphere. All X-ray  diffraction (XRD) patterns were recorded on a PANalytical  Empyrean diffractometer equipped with a Cu Kα radiation (λ=  1.5406 Å). Each Fourier transform infrared spectrometer (FTIR)  spectrum was collected on a Tensor 27 FT-IR Spectrometer  (Bruker, Germany) after 32 scans at a resolution of 4 cm-1 from  400 to 4000 cm-1. Raman spectra were obtained using a  Renishaw InVia Reflex spectrometer (Wotton-under-Edge, UK),  operating with an excitation laser wavelength of 532 nm. The  diffraction grating gave the spectra with a spectral resolution  of 2 cm-1. The specific surface areas of the photocatalysts were  determined by Quadrasorb SI-MP (Quantachrome Instrument).  All samples were degassed at 60 °C for 10 h before N2 adsorption. The carbon contents of the samples were investigated using an electron probe microanalyzer (EPMA)  (Shimadzu, EPMA-1720, Japan). X-ray photoelectron  spectroscopy (XPS) was obtained with an ESCALab220i-XL  electron spectrometer using 300 W Mg Kα radiation. All  binding energies were referenced to the C 1s neutral carbon peak, which was assigned to the value of 284.8 eV to  compensate for surface charge effects. Diffuse reflectance UVvisible spectra were recorded with Hitachi U-3010  spectrophotometer and photoluminescence (PL) spectra were  measured at room temperature on an Edinburgh Instruments  FLS920 spectrometer with 375 nm laser light source. The  electron paramagnetic resonance (EPR) spectra of carbon doped nanomaterials were recorded using an ELEXSYS ESR spectrometer (Bruker) operating at 9.7 GHz  with a modulation frequency of 50 kHz and a super-high Q  microwave cavity. All ESR samples were placed in Quartz ESR  tubes with an inner diameter of about 5.8 mm.

All of the samples obtained after calcination of TiO2- oleylamine nanosheet precursor in air are yellow powders in  appearance, in contrast to grey powders of carbon hybrid  photocatalysts we reported previously,28 no matter high or low  heating rate was used. However, the activity of these  photocatalysts differs from one another significantly.  Photocatalytic H2 -production activity was evaluated under  simulated solar irradiation using methanol as a sacrificial  reagent and Pt as co-catalyst. All the measurements were  carried out in an online photocatalytic hydrogen generation  system at ambient temperature. Hydrogen production rates  from the suspensions with different photocatalysts as a  function of time are shown in Fig. 1a. The rates of hydrogen  production calculated for F-400-1 and F-500-0.5 are 621  μmol·h-1 and 676μmol·h-1, respectively. The stability of these  two photocatalysts was also tested by repeating photocatalytic experiments. After four cycles, both the photocatalysts exhibit  no significant loss in activity, indicating their good stability in photocatalytic hydrogen production. In contrast, the hydrogen  production rate over N-300-450 is around 338 μmol·h-1 in the  first 1 h, but decreases quickly to 212 μmol·h-1 in the second  cycle. Similar behaviour and slower hydrogen evolution than  that of N-300-450 can be observed for N-300-500. It is  apparently that F-400-1 and F-500-0.5 show much higher and  more stable photocatalytic activity for water splitting than N- 300-450 and N-300-500. Photocatalytic experiment of commercial P25 powders was also tested and the results are  shown in Fig. 1a for comparison. In otherwise identical  condition, P25 powders present a slightly lower hydrogen  evolution rate than those of fast heating process derived  photocatalysts. More importantly, evolved hydrogen from  water in P25 suspension decreases gradually with increasing  the illumination time. The photocatalytic hydrogen production  rates under visible light (λ>400 nm) over these carbon doped  TiO2  samples were also measured by equipping the light  source with a 400 nm longpass filter, and the results are  shown in Fig. 1b. Only the fast heating process derived  photocatalysts exhibit visible light activity. Hydrogen evolution  rates from samples F-400-1 and F-500-0.5 are detected as 5.2  and 5.9 μmol·h-1, respectively. No hydrogen was detected from  water with N-300-450 and N-300-500 after 5 h illumination.  The apparent quantum efficiencies of F-500-0.5 are calculated  to be 6.02% at 365 nm and 0.14% at 420 nm.

Fig. 2b shows the FTIR spectra of the photocatalysts. The  characteristic absorption bands of adsorbed water molecules  including stretching vibration ranging from 3200 to 3400 cm-1 and bending vibration at around 1633 cm-1 are clearly visible in all samples, indicating that water is adsorbed on their  surface.30 The strong absorption band at ca. 462 cm-1 originates from the vibration of Ti-O bonds, and the absorption  bands at 1384 cm-1 can be assigned to O-H in-plane. 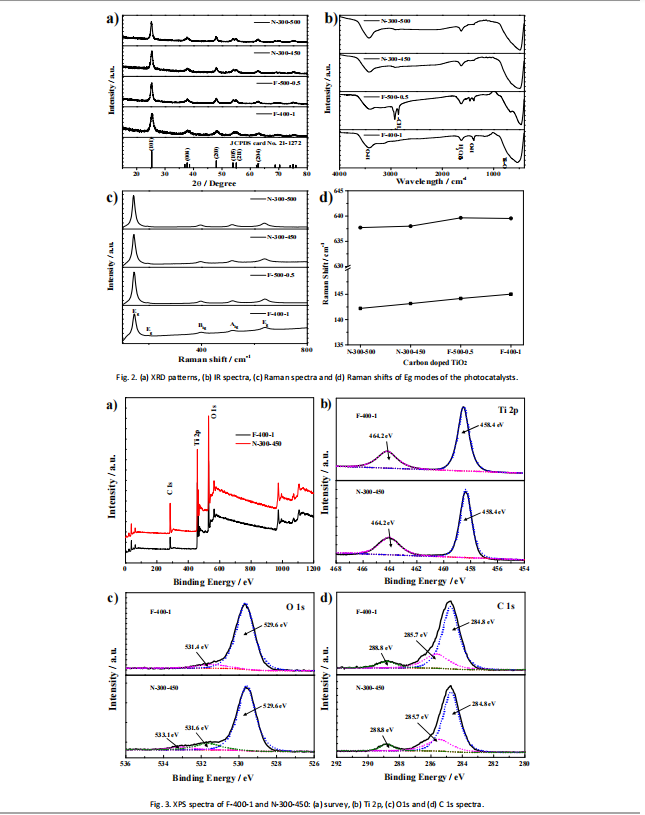